Cinema had started to bore me. Nothing really felt inspiring enough to write about. And that really should explain my Missing in Action state when it came to elaborate movie reviews. What made me come back? Blame it on Gone Girl, a film so deliciously wicked that I couldn’t really keep myself from writing about it.

So then it is that man again. If Fight Club, Seven and The Social Network weren’t really enough, this time David Fincher goes inside the deep recesses of the human mind and unravels it layer by layer adding his own touch of magic to a story which feels terrifyingly real. So you have Ben Affleck whose loving, pretty, beautiful wife Rosamund Pike goes missing. And on this concept rests the story of Gone Girl. Without giving anything away, it is a film which grips you and leaves you transfixed through out its 150 minute duration. It introduces us to people who seem absolutely normal from the outside, but are wicked within. People who have their own notion of right and wrongs and characters who will go to any lengths to have their way. 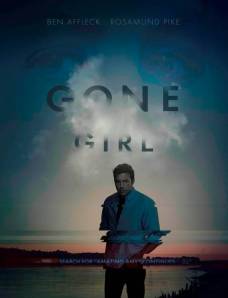 me, the film’s story really hit home. A lot of you may come out of the movie questioning do characters like these exist and the only answer I have is a vehement YES! They are all around us and till you don’t really know them, you don’t really know them. Another point which really caught my attention is the fact that the laws not just in India, but the world over are so lopsided that if a woman decides to use the law to her advantage, she can run riot and in the process leave men with no chance at all to defend themselves. The film’s narrative structure of letting you form an opinion before revealing the other side is simply a master-stroke and makes you root for characters which you eventually come out loathing.

The performances are all top notch, but what elevates the film’s tension is the background score composed by the maestros Trent Reznor and Atticus Ross. The duo never let the score go overboard and keep it consistently real and that works big time.

As you may have guessed by now, this is a film which has left a lasting impact on me. In fact some of the incidents depicted in the film left me with a sense of Deja-Vu. This is quite simply one of the best films of the year, so go ahead and watch this as soon as possible. Priority watching highly recommended.